400th Anniversary of Signing of Mayflower Compact is November 11, 2020

Plymouth, MA (November 11, 2020) Pilgrim Press Special Edition – November 11th is an important day in America. Not only does the country honor its Veterans, but it is a day when, 400 years ago, a small group of Pilgrims signed the Mayflower Compact, a document that influenced the founding of America. 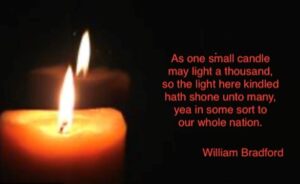 “William Bradford refers to ‘one small candle’ in his writings and it is only fitting that today we light a candle to commemorate the importance of the Mayflower Compact,” said Jane Hurt, Governor General of the General Society Mayflower Descendants (GSMD). “The Mayflower story is one of America’s founding stories that brought democracy to our country, so it is fitting we would remember the anniversary of the signing of the Mayflower Compact while honoring our Veterans who fought for this country.”

When the Pilgrims sailed to the New World headed for the Virginia Territory, the ship was thrown off course by a storm, ending up at Provincetown, MA where the Mayflower Compact was signed, bringing civil and religious liberty to the New World. The Mayflower eventually landed at Plymouth where the colony was established.

“The importance of the Mayflower Compact cannot be overstated,” said Susan Belekewicz, Executive Director, GSMD. “One of America’s oldest founding documents, it later influenced the U.S. and Massachusetts Constitutions.”

The Pilgrims settled in Plymouth, named years before by English explorer John Smith. Before the Pilgrims landed, it was a settlement called Patuxet, occupied for over 10,000 years by a Native American band of the Wampanoag tribal confederation. The Natives died of what, today, is speculated to be Leptospirosis, a disease likely brought to the New World on English ships.

Today, Plymouth welcomes over a million people a year, who enjoy learning the history while relaxing in the New England town that offers Mayflower history, attractions, shopping, and dining.